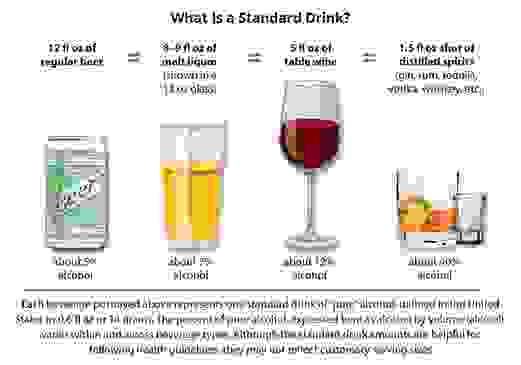 Drinks like beer, malt liquor, wine, and hard liquor contain alcohol. Alcohol is the ingredient that gets you drunk.

Hard liquor—such as whiskey, rum, or gin—has more alcohol in it than beer, malt liquor, or wine.

These drink sizes have about the same amount of alcohol in them:

Some slang names for alcohol are:

Getting drunk can lead you to do or say things that you regret later on. It also makes you more likely to get into a car crash and get hurt.

After drinking a lot, people get a headache and feel sick. This is called a hangover.

People who misuse alcohol, or people who are addicted, start having to drink more and more to get drunk. They might have a drink in the morning to calm down or stop a hangover. They might drink alone, and they might keep it a secret.

They might forget things that happened when they were drunk. This is called a blackout.

Effects of Alcohol on Brains and Bodies

These are just some of the problems alcohol can cause:

Heavy drinking over the years can raise your risk for stroke (a “brain attack”), cancer, liver disease, and other illnesses.

People can forget to use condoms when they're drunk. They can then have unsafe sex and get HIV/AIDS or hepatitis (a liver disease).

Problems with Your Baby

If a pregnant woman drinks alcohol, it can cause brain damage, which can lead to other health problems in the baby.

Being drunk makes you more likely to get hurt or killed. Alcohol is involved in:

Heavy drinking over the years can permanently hurt your brain cells. This can make it hard to walk, remember, or learn new things.

You can die from drinking a lot of alcohol at one time, called alcohol poisoning. It can especially happen to young people who are not used to drinking.

If someone you know has any of these signs, you should call 911 right away.

You can get addicted to alcohol just like other drugs. Over time, alcohol can change the way your brain works. If you stop drinking alcohol, your body can get confused and you can start to feel really sick. This makes it hard to stop. This is called addiction.

They will feel a very strong need to drink alcohol.

Fortunately, there are medicines and other treatments that can help someone recover from alcohol addiction.

Remember that even if you get treatment, it can be hard to stop drinking. People who stopped using alcohol can still feel strong cravings to have a drink, sometimes even years later. This is normal. This is also why it’s important to stay in treatment for as long as your doctor suggests, and learn to enjoy friendships and activities that do not center on drinking.

The “Discussion Starter” is the newest product for SAMHSA’s “Talk.  They Hear You.” is set on a within a community setting showcasing a variety of situations that parents and caregivers could have a conversation about alcohol, and culminating into and school basketball court where 12- to 13-year old boys are playing a Saturday morning game.

SAMHSA's "Talk. They Hear You." Keeping Our Kids Safe

Keeping kids safe from underage use of alcohol and misuse of prescription pain medications is a concern for many parents. Parents are encouraged to talk with their children early on and frequently in this public service announcement from SAMHSA’s “Talk.  They Hear You.”® parent-focused national media campaign.

SAMHSA'S "TALK THEY HEAR YOU" REMINISCING

Actress Torrey DeVitto and her father, musician Liberty DeVitto, talk about the importance of parents having small conversations with their children about underage drinking and the use of other drugs.  For more information about talking with your kids about underage use of alcohol and other drugs, visit underagedrinking.samhsa.gov.

samhsa's "talk they hear you" we hear you

Even though it might not seem like it, your kids really do hear you when you talk to them about alcohol and other substances. Parents are encouraged to talk with their children early on and frequently in this public service announcement from SAMHSA’s “Talk.  They Hear You.”® parent-focused national media campaign. For more information about talking with your kids about underage use of alcohol and other drugs, visit underagedrinking.samhsa.gov.